Toot StrudelsThere's FROOT* in every toot! 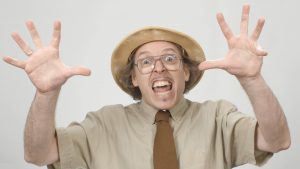 Professor Wolfgang van Tütstrudel (born circa 1975) was raised by a roving band of toilet craftsmen in the Austrian countryside. He was a child prodigy and quickly rose to the rank of porcelain grandmaster. With nowhere left to climb, as he toiled in the toiletshoppe, he occupied his mind by developing the world’s most advanced form of bathroom humor. With seventeen international patents in flush-joke technology, van Tütstrudel published the 1987 smash-success book, Toilet Jokes for Toilet Folks. 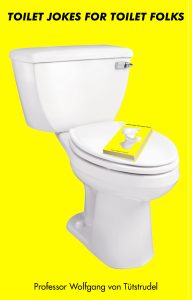 Although the 1987 world population was only about 5 billion people, Toilet Jokes for Toilet Folks sold over 30 billion copies – an average of 6 copies per person on Earth. While the average was 6 copies, some comedy fans were reported to have owned hundreds or maybe thousands of copies so that they could keep one at arm’s reach at all times.

Having already achieved the impossible, the Professor sought to then achieve the improbable, inventing devices and techniques for solving problems people didn’t even know they had: the automatic fingernail counter, the water rehydrator, the turtle crossing marking system, and the record player that only played reversed, satanic, backmasked messages. By the mid-1990s, rumors of financial ruin abounded. With the Tütstrudel corporation facing a media blackout, their operations became top secret.

They were rumored to be involved in everything from alien abductions to Earth-flattening hammers to radioactive-waste disposal. None of these rumored activities were ever proven to be true, and media investigations could find no acquisition or construction of aliens, hammers, or nuclear-storage facilities. Nonetheless, the corporation re-emerged as a financial power, becoming the top-traded stock of 2008. In 2019, Professor van Tütstrudel solved one of the greatest problems humanity has faced in its short existence in the universe by inventing a toaster pastry that not only self-heated, but also remained the perfect temperature all day long.